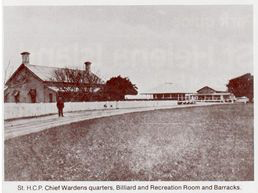 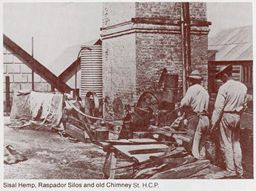 St Helena is located in Moreton Bay 5 km from the mouth of the Brisbane River and about 8km north-east of Manly. The Island has a fascinating history. Its most significant period was when it functioned as a high-security colonial prison from 1867.

The overcrowding in Brisbanes gaols resulted in the conversion of the buildings, originally intended for a quarantine station, into accommodation for prisoners. Prison labour was used for all activities on the island, from the construction of buildings and roadways to growing, processing and cooking of food.

The first few years were devoted to construction of the two cell blocks, kitchen, bakehouse, hospital, underground tanks, stables, boathouse, storehouse, jetty and Superintendents home. This formed the base of a building program which continued until the prisons last years.

In 1869, the lime kiln and sugar mill were added. Sugar cane growing and processing kept the prisoners busy until the workshops were well enough established to take over as the main source of work on the Island. These trades included bootmaking, sail-making, tailoring, saddle making, tinsmithing, candle making, book-binding and carpentry. The long termers were occupied in these workshops inside the prison stockade and the trustees engaged in animal husbandry and agriculture.

Some of the buildings were made from beachrock quarried on the island, or from bricks made on site from clay found at the northern end of the island. Others were constructed of timber imported from the mainland. Tradesmen employed as prison warders supervised this work, maintaining a high standard of workmanship and productivity. While the prison layout and organisation was based essentially on the English penal system, the prison architecture was largely a reflection of the late 19th Century trend to a colonial style of architecture.

The limited area of St Helena Island (166 hectares) and the increasing needs of the settlement, resulted in extensive clearing of the natural vegetation for agricultural and other development. The native vegetation was regarded as having little or no financial value as timber, or aesthetic value as shade or garden trees.

The Superintendent of the prison had extensive gardens surrounding his house and, for many years these gardens were considered the best in Queensland, but they consisted almost entirely of plants introduced into Australia. Crocus and White Allysum continue to thrive on the Island to this day. The Superintendent and the warders ran the prison in a highly efficient manner. For most of the prison’s 65 years; self-sufficiency was a necessity and profit was the product of that efficiency.

The St Helena Island Penal Establishment, at one stage of its operation, was considered to be the best prison of its kind in the world. The St Helena island Penal Establishment had prize Ayreshire dairy cattle that constantly won awards at the RNA show and the island’s olive groves yielded prize-winning oil at shows in Italy, the country of their origin. The entire establishment had been kept with an eye for perfection.

The life of the island rotated around the supervision of prisoners – as seen in the constant patrols, barred windows and leg irons. This constant regulation of work, behaviour and movement was the essence of 19th Century prison life. Although few people ‘swam’ in those days and shark feeding was instigated as a deterrent, escape was a constant reality. Magistrates recognised the right of each prisoner to attempt escape and the responsibility of each warder to frustrate it. Sentries were posted, windows barred and warders were constantly on the alert.

The St. Helena tramway is considered to have been a most significant component of the prison establishment; it operated between 1885 and 1932 and provided the first passenger tramcar service in Queensland. Remaining evidence includes the tramway embankments, the distinguishable rights of way, the docking bay in the Stores building, the ‘Kangaroo’ car and the trolley wheels.

Administrative problems, the new social conscience, prison reform, the potential for a major fire in the aging timber buildings and the lonely isolation of warders from friends and family led to the prison’s closure in 1932. It had operated very successfully for 65 years.

Historical significance was not recognised and so, in 1925, demolition of the buildings began. This work was also done by prisoners and most re-usable materials were taken to the mainland for distribution to other Government institutions. The suggestion that St. Helena Island be made a national park was mooted as early as 1910 by the then Mayor of Brisbane. The island was the first historic site to be managed by the Department of Environment and Conservation for its historic values.

Today, approximately 7% only of the original structures remain and these are mostly the ones that were built from beachrock or brick. Restoration costs would be prohibitive so preservation of the remaining structures is the order of the day. 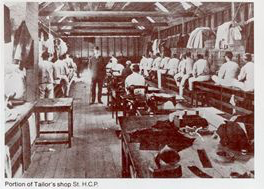 The Museum displays artefacts and information relating to the St Helena Island Penal Establishment. There are public toilets and shelter areas at the causeway area.

The grassed flats in the unrestricted zone are ideal for picnicking and ball games. The mud flats to the south-east at low tide expose a wealth of surprises for the beachcomber. Guided tours of the ruins give an insight to the penal and social aspects of the mid 18OO’s to early 1900′s.

The Queensland Parks and Wildlife Service hopes your visit to St Helena Island is enjoyable and informative. A common sense attitude to the ruins and consideration for other people will ensure the quality of your experience.

The area bounded by the quarry and old tramway up to the southern boundary of the first grazing paddock is unrestricted. There is no fee for use of this area.

Get in Touch with us!